Bernie moving to Australia from Macau via New Zealand (Aug 2022)

Aura and Miro move from Hong Kong to Germany (January 2022)

Helping our cat GaGa moving to the UK (February 2021)

Moving Layla the dog, from the UK to Macau, via Hong Kong (December 2019)

Testimonial from a frequent flyer (Dec 2019)

Moving our Labrador from Hong Kong to Singapore (March 2020)

Moving our dog Loki, from Canada to Hong Kong (October 2019)

Pet relocation for our dog Coco to Japan (September 2019)

Our dogs Zombie and Monster travel to Melbourne (Sep 2019)

Our dog travelled from Burma to Calgary (June 2019)

Our Golden Retriever dog Apple's move to UK (May 2018)

George and Harry relocate with their families to UK (April 2017)

Milk traveled from Hong Kong to Milan, Italy- May 2017

Limbo has safely arrived in Hong Kong from Paris- 2018

Sinclaire family of five to Canada

In July 2002 I relocated from Brunei, SE Asia, to the United Kingdom with four dogs; and it was a nerve wracking experience, with no kennel relocation staff to advise me. A year later, I secured a job in Hong Kong and Ferndale Kennels, Sai Kung, imported those same four dogs from the UK to Hong Kong, through the comparatively new Chek Lap Kok Airport.

I had arrived in HK three weeks earlier to set up a home and Stacey Tucker, who then owned Ferndale, drove me to out to the airport to be reunited with my beloved Brunei dogs. Fast forward seventeen years to February 2020 and now three Hong Kong dogs and I were planning to relocate to the UK.

Why I chose Ferndale

Ferndale Kennel was my first choice for pet relocation because of my previous, positive experience, and because I was living in the Sai Kung Country Park . Plus, Ferndale is now owned and run by Dr Matthew Murdoch the HomeVet, who used to make regular home visits keeping my, by then, 15 year old Brunei dog comfortable as she aged.

The importance of crate training

Despite my previous experience of pet relocation, the preparations were still stressful for our move in February 2020. I knew the basics, though, so started crate training Kay, Toby and Jamie in December 2019, ahead of the mid-February move. I sent off the household effects, including the dogs’ beds, in early December, so the dogs could only sleep in the crates that they would travel in. They had no other choice! 2 Of course, living in a spacious village house meant that I had room for the travel crates, which helped a lot. Since my bed and mattress had been shipped to the UK, I slept on the sofa bed in the living room and the dogs settled into their crates in the same room at night. I did not put the doors on the travel crates until January 2020, then I started to close the door for a short period; and gradually increased the closed door time until, by the end of the month, the dogs were sleeping soundly right through the night with the kennel doors closed. I could have made life easier by buying the travel crates from Ferndale, as advised, but I wanted the same brand that I had used years earlier. Even so, when I was uncertain about the best size crate to use with the erect ears of the Sai Kung Pedigree Tong Gau, Dr Matthew was supremely patient and let me take one of the dogs to Ferndale Kennel to try out different crate sizes. (Pets Central Sai Kung allowed me to do the same with the kennel brand I chose to purchase independently.)

From this stage onwards, Ferndale Kennel staff kept me well informed and, importantly, calm, as the move date approached and I began to stress! By January 2020 news of the growing Corona Virus epidemic on the Mainland was developing and the daily situation in Hong Kong began to change. Fortunately, I had regular email updates from Ferndale on the now rapidly changing situation with the only two airlines offering direct flights for pets travelling to the UK. British Airways were not giving sufficient details on pricing so I opted for Cathay Pacific. With flights booked and Ferndale firmly in charge, I concentrated on all the personal tasks that must be completed before leaving Hong Kong. 3 In late January 2020, I flew to the UK to take delivery of the household hold effects and to set up our new home, placing the dogs’ beds and toys ahead of their arrival in mid February. I had also checked online that the dogs’ favourite kibble was available locally, and purchased a supply from our local Pets At Home store, ensuring that there was continuity of diet for my fur babies.

The Ferndale Team in Action

Then it was back to Hong Kong in time for the dogs’ health check and de worming three days before our departure date. HomeVet and Ferndale relocation staff came in convoy to our house in the Country Park for the health checks and to complete the necessary paperwork. The Veterinary details finished, the Ferndale Pet Relocation Team gave me a trial run through of what to expect on Departure Day. This was very helpful in keeping me calm and informed. I was shown the interior of the van that would transport the dogs to the airport; shown the cratelining mats that would be used; and given a general run through of procedures on the day.

Trust the Ferndale Team – they are the experts!

There was just one heart-stopping moment the day before we were due to leave Hong Kong. With the increasing threat of Corona Virus, Hong Kong Civil Servants were only working for three days during the week of our planned departure: Monday, Wednesday and Friday; but our flight was in the early hours of Thursday 13th . Furthermore, the export paperwork could only be legally processed on the day of export. Oh no! Flights for the next two weeks ahead were fully booked. We were all supposed to fly out on the same flight. Would the dogs’ paperwork be completed on time? 4 Again, Ferndale staff were in contact with me constantly, and kept me updated as I waited on tenterhooks. A little voice in my head repeated a mantra: After seventeen years in Hong Kong, I know a solution will be found. Hong Kong is efficient. Sure enough, by 9:30am on Departure Day, a delighted Ferndale staff member telephoned me with the good news that the paperwork had been processed. We were on our way!

I declined Dr Matthew’s offer of a calming medication for the dogs, as I wanted them to be aware of their surroundings. I followed the rest of the excellent advice from Ferndale, though. The dogs had their regular walk in the morning, but were kept on leads. They were fed breakfast and lunch but had no more meals that day, just water until their evening departure for the airport. Still following Ferndale advice, the dogs had an evening lead walk and, precisely on time, the relocation team arrived at the house. Everything was calmly prepared, there was no sense of urgency or rush. The dogs had a final, short, lead walk outside the village to relieve themselves. I stepped back and let the Relocation Team get to work, following the exact procedure they had outlined to me three days before. 5 The travel crates were prepared with liners and mats; water bowls and a small funnel were attached to each of the kennel doors; and a huge water container prepared for use at the airport, where the water bowls would be filled. It was a great relief for me when I was informed that the travel crates would be carried outside the house and placed next to the Ferndale van. I would then take each dog outside and settle them into the crates before they were loaded into the van. This was Departure Day and the dogs had left for the airport. We were on our way! Three hours later, I closed the village house in the Sai Kung Country Park for the last time, and set off for the airport myself.

Again, Ferndale was right there with me. Once I had made it through to the Departure Lounge at Chek Lap Kok Airport, I began to receive updates and photographs on my mobile phone of the dogs in their crates as they waited to be loaded into the aeroplane. We were all at the airport together. Ferndale kept me calm! The photographs showed me that the dogs were not overly stressed, were curious about their surroundings, and that Ferndale staff were right there with them. Eternal thanks for those photographs! Arriving at our destination

The uneventful flight, with zero turbulence (which had been my greatest fear for the dogs) landed on a cold, grey, February morning at Heathrow Airport 6 I arrived at my home, very close to the airport, at about 7am and waited for the dogs to be delivered from the Animal Reception Centre at Heathrow. Just before midday UK time, the dogs were delivered to the house. If a dog could smile, Toby did. His face lit up when he saw me and he leapt right out of the crate, lively and overjoyed. Kay and Jamie also leapt out of the crates and almost into my arms! The crates had been cleaned up by the Animal Reception Centre Staff, and my beloved three dogs were in remarkably good condition after a twelve hour flight. After they had relaxed and had a restorative nap, I walked them on leads around our nearby Green. They were very curious about the new sights and smells, trying to process the scent of new creatures such as squirrels and urban foxes.

Settling into a routine

The next day, I kept Kay, Toby and Jamie on leads for a walk in the local park. They were overjoyed at meeting a huge variety of friendly, designer and pedigree dogs - more than they had ever encountered before – even more than on the Sai Kung Waterfront! I quickly settled the dogs into the same routine they had had in Hong Kong, with feeding and walk times the same. 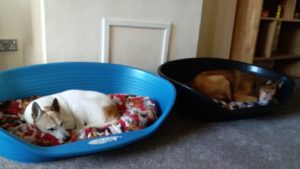 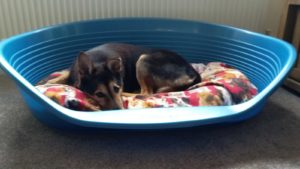 2020 was an extraordinary year worldwide, with the Corona Virus becoming a global pandemic. We also arrived in the UK during the wettest February on record; plus, the UK went into National Lockdown in March 2020, all of which curtailed our walks somewhat and meant that we have had to stay local for our new adventures. 7 My three dogs have settled amazingly well with a routine; eating the same kibble that I fed them in Hong Kong; and plenty of TLC! Toby did not like the long, light, summer evenings and searched the house looking for a dark spot to sleep each night. It was very funny to see his obvious annoyance! Although I am sure that the dogs miss the continuous whirr of cicadas, and cooling dips in the steams and on the beaches of the Sai Kung Country Park, we now live in the greenest of all the London Boroughs and have several green, open spaces nearby, such as Harmondsworth Moor, where we enjoy our daily walks. There are other amazing beauty spots to enjoy within a fifteen minute car drive of the house. Langley Park and Black Park near Iver, are our firm favourites. The dogs’ body language and facial expressions through the eleven months that we have been in the UK, and through the full cycle of seasons, from Spring to Summer, Autumn and even Winter snow in the London suburbs, speak reams!

Ferndale Kennel and HomeVet Services are a great combination; and I highly recommend them for Pet Relocation. Thanks a million Dr Matthew and all the staff at Ferndale for helping us on our Big Adventure to our new life in England! Thank you everyone!